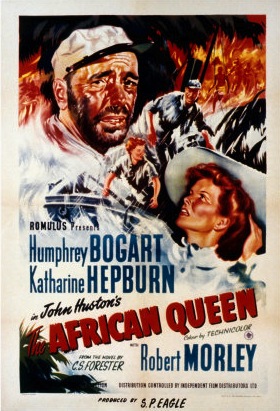 Adapted from a novel by C.S. Forester, The African Queen stars Humphrey Bogart in his Oscar-winning portrayal of Charlie Allnut, the slovenly, gin-swilling captain of a tramp steamer called the African Queen, which ships supplies to small East African villages during World War I. Katharine Hepburn plays Rose Sayer, the maiden-lady sister of a prim British missionary, Rev. Samuel Sayer (Robert Morley). When Germans invade and Samuel dies, Allnut offers to take Rose back to civilization. She can’t tolerate his drinking or bad manners; he isn’t crazy about her imperious, judgmental attitude. However it does not take long before their passionate dislike turns to love. Together the disparate duo work to ensure their survival on the treacherous waters and devise an ingenious way to destroy a German gunboat. The African Queen may well be the perfect adventure film, its roller-coaster storyline complemented by the chemistry between its stars. The profound difficulties inherent in filming on location in Africa have been superbly documented by several books, including one written by Katharine Hepburn.

Film starts at 7:15 pm Thursday, May 12. All seats are $8. Get to the Classics early as they are popular — or buy tickets in advance (see right column on the Rialto website). The Thursday evening Classics are very popular, so you may want to buy your ticket in advance at the box office or online. Getting to the theater early is always a good idea–for a choice of seating and to order food and drinks.