An ad campaign by pottery manufacturers. Pottery was given away every Tuesday until the entire set was collected. Watch CHRISTMAS STORY for a bit of free pottery at the local theater! © El Cerrito Journal 1944

An El Cerrito parade day in 1948. An 18 year old theater usherette greets fire engine. A portion of the theater’s marquee can be seen at upper left corner. © Marks and Orine Weeks.

Students waiting outside theater in 1940’s. The poster behind them reads BING CROSBY IS GOING MY WAY. © Tony Wise

The theater as it looked in 1969, before the marquee was taken down. © Jack Kirby.

The Cerrito Theater circa 2002.

Construction began with a new frame for the marquee. 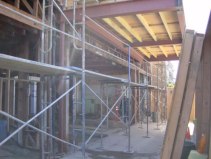 During most of the 11 months of construction, the building looked like this.

Construction is in its final stage. The frame is being prepared for the return of the marquee. 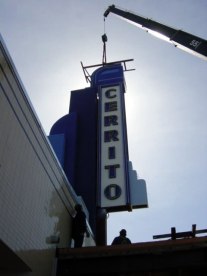 The marquee is added. This was the most exciting part!

October 23, 2006. The marquee lights up for the first time. The crowd cheers.

The main theater on the ground floor. © Lerner + Holan Architects 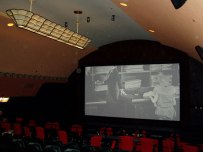