Friends of the Cerrito Theater mourn the passing of a great filmmaker, Les Blank. Blank, a soft-spoken man, made being soft spoken part of his style, as he became a fly on the wall observing — and filming — life around him. 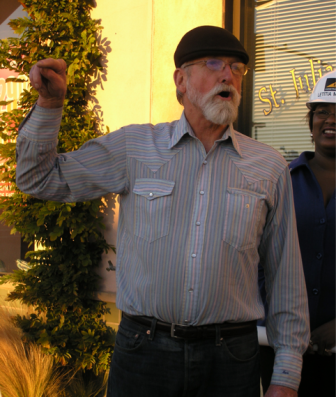 Les Blank at the groundbreaking for the reconstruction and restoration of the Cerrito Theater in 2005.

All the while he kept so quiet the people he filmed forgot he was there — hence the intense realism of his films, and their informality.

Blank is best known for his movies about folk music, ethnic music, and the like, “The Blues According to Lightnin’ Hopkins,” “Chulas Fronetras;” food (“Garlic is as Good as 10 Mothers“; and the classic “Werner Herzog eats his Shoe.”

But have you seen the two movies he made about the Maestro, the wonderful cowboy performance artist from Albany?

Dave Weinstein, chairman of Friends of the Cerrito Theater and author of “It Came from Berkeley,” will talk about Berkeley’s fabulous history as a movie-mad town, a place that at one time had “more theater screens in a concentrated area than any other place in Northern California,” and a town that is said to have given birth to the repertory cinema!

Learn about some of Berkeley’s first theaters and some of its most beautiful. Hear about some tragic losses and some magnificent wins in efforts to preserve cinema palaces.

See what some of Berkeley’s vanished theaters looked like what they were new — and what they look like today.

And bring your memories, as we are trying to track down more historic theaters!

One of our favorite local artists, Jana Bouc, has drawn a lovely sketch of Cerrito Theater. Check her work at JanasJournal.com.