Please join Friends of the Cerrito Theater, which cosponsors the Classics: 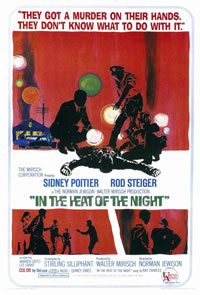 “In the Heat of the Night.” Rod Steiger, one of Hollywood’s greatest tough guys, won an Oscar for his performance in this taut, gripping drama about murder, racial prejudice, and tensions bubbling to the surface in a small Southern town. Sidney Poitier, as a Philadelphia detective, tangles with Steiger in “one of the most fascinating duels of wits the screen has offered,” critic Steven H. Scheuer wrote, calling it “a first-rate film in all respects.” The movie won the 1967 Oscar for best picture.

Get to the Classics early as they are popular — or buy tickets in advance (see right column on the Rialto website). The Thursday evening Classics are very popular, so you may want to buy your ticket in advance at the box office or online. Getting to the theater early is always a good idea–for a choice of seating and to order food and drinks.

Our upcoming February Classic: Watch for our “The Band Wagon,” with Fred Astaire and Cyd Charisse, February 10, 12 and 13.