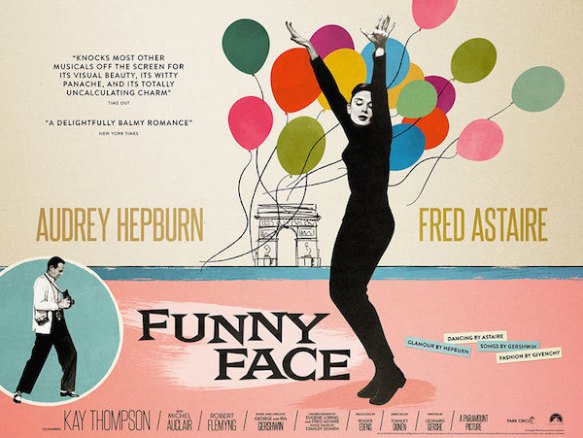 Bring in the new year with Fred Astaire and Audrey Hepburn in “Funny Face” Thursday, January 11, at 7:00 at the Cerrito!

Fred Astaire as a blasé high-fashion photographer? Audrey Hepburn as an introverted bookstore clerk? It could happen! And lots more happens in this delightful confection of a romance.

It starts in Greenwich Village, where Astaire “discovers” Hepburn and sees a future for her as a fashion model. Then, they whisk off to Paris for an up-and-down adventure, which includes Gershwin songs, and dancing, and much more. Along the way, we’re treated to a bit of satire toward the high fashion world, and even Existentialism. All photographed with high style and imagination, directed by Stanley Donen, with four Oscar nominations.

What a way to start a new year!

“Funny Face” plays once only on Thursday, January 11 at 7:00 p.m.. All seats are $9.00. Moviegoers are strongly advised to buy advance tickets at the box office or online, as many shows sell out. Arriving early is a good idea, in order to choose your seat and also order delicious food and wine or beer.

Do you have a favorite thing to eat at Scene yet? There are so many possibilities—including flatbread pizzas, a charcuterie and cheese sampler, baked sandwiches, “bites,” salads, and desserts. You can enjoy them there, or have them brought to your seat while you watch the movie. It’s also a fun place to hang out, with special wines and beers available. Check it out—on the right side of the theater, as you enter.

The next Cerrito Classic will be on Thursday, February 8 at 7:00.

The title will be revealed soon—watch for announcements!

Cerrito Classics play monthly, always on the second Thursday of the month, at 7:00.