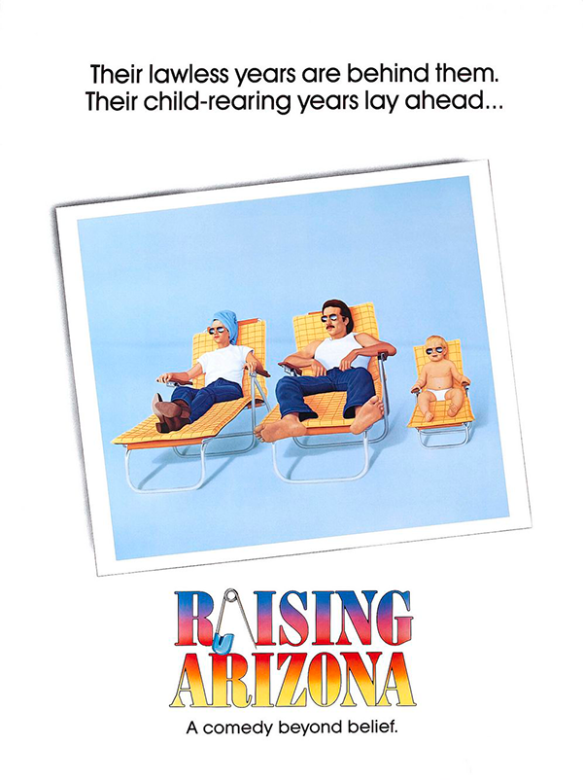 Catch some zaniness with “Raising Arizona,” on Thursday, November 9, at 7:00 at the Cerrito!

Why is “Raising Arizona” a cult classic? As Brian Welk, explains in SFGate:

Perhaps no Coen Brothers movie is ultimately as heartfelt as “Raising Arizona.” It’s the touching story of a family getting a second chance at life and learning to cope with the hand fate has dealt. Oh, and it’s also a hilarious movie about baby-napping. It’s a masterpiece.

Small-time convenience store robber H.I. McDonough, known as “Hi,” played by Nicolas Cage, and Edwina, a prison employee in charge of taking mug shots, played by Holly Hunter, make an unlikely couple, to say the least. But they are endearing.

“Raising Arizona” is a zany love story, of the two of them, and of their love for a baby. Many hilarious supporting characters and more twists and turns than you can keep track of.

“Raising Arizona” plays once only on Thursday, November 9, at 7:00 p.m. All seats are $9.00. Moviegoers are strongly advised to buy advance tickets at the box office or online, as many shows sell out. Arriving early is a good idea, in order to choose your seat and also order delicious food and wine or beer.

What is your favorite thing to eat at the Scene? If you don’t have one yet, there is a lot of catching up to do—including flatbread pizzas, a charcuterie and cheese sampler, baked sandwiches, “bites,” salads, and desserts. You can enjoy them there, or have them brought to your seat while you watch the movie. It’s also a fun place to hang out, with special wines and beers available. Check it out—on the right side of the theater, as you enter.