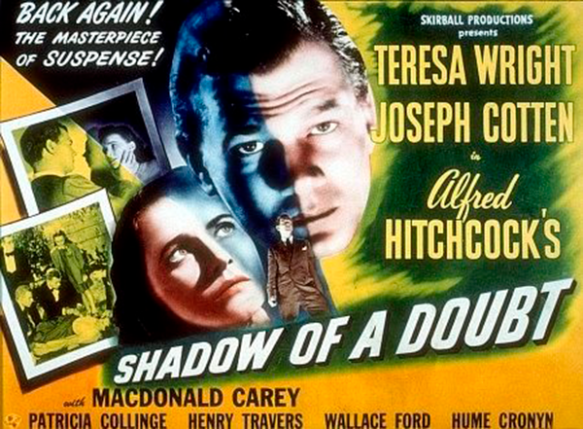 Chills come to the home town!

The “Master of Suspense” is at it again! In “Shadow of a Doubt,” Alfred Hitchcock set and filmed the thriller in our own backyard…the idyllic town of Santa Rosa in 1943. You can even go see the house in which it was filmed.

Hitchcock described the acclaimed movie as his favorite, and the Oscar-nominated script was written by Thornton Wilder, Sally Benson, and Hitchcock’s own wife, Alma Reville.

Teresa Wright plays the teenager who wishes her beloved Uncle Charlie would come visit and liven things up…and that is exactly what happens…but not at all in the way she wants. Uncle Charlie, superbly played by Joseph Cotten, starts acting oddly…and then…

You will be on the edge of your seat as the story unfolds…Hitchcock style.

“Shadow of a Doubt” plays once only on Thursday, April 9 at 7:00. All seats are $8.00. Moviegoers are advised to get advance tickets at the box office or online, as shows may sell out. Arriving early is a good idea, in order to choose your seat and also order delicious food and wine or beer.

Have you visited Scene yet? It’s the atmospheric wine/food bar on the right side of the lobby–a great place to enjoy a special menu, such as panini, snacks, and salads—or have them brought to your seat while you enjoy the movie! Scene opens daily at 4:30, with happy hour prices until 6:00.