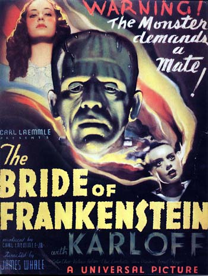 The wicked Byron mockingly chastises Mary for frightening the literary world with her recent novel Frankenstein, but Mary insists that her horror tale preached a valuable moral, that man was not meant to dabble in the works of God. Moreover, Mary adds that her story did not end with the death of Frankenstein’s monster, whereupon she tells the enthralled Byron and Shelley what happened next. Surviving the windmill fire that brought the original 1931 Frankenstein to a close, the Monster (Boris Karloff) quickly revives and goes on another rampage of death and destruction. Meanwhile, his ailing creator Henry Frankenstein (Colin Clive) discovers that his former mentor, the demented Doctor Praetorius (Ernst Thesiger), plans to create another life-sized monster — this time a woman! After a wild and wooly “creation” sequence, the bandages are unwrapped, and the Bride of the Monster (Elsa Lanchester again) emerges. Alas, the Monster’s tender efforts to connect with his new Mate are rewarded only by her revulsion and hoarse screams. “She hate me,” he growls, “Just like others!” Wonderfully acted and directed, The Bride of Frankenstein is further enhanced by the vivid Franz Waxman musical score.

The showing is on Thursday, October 11, at 7pm. All seats are $8. Getting to the theater early is always a good idea–for a choice of seating and to order freshly-made food and drinks. You are strongly advised to buy tickets in advance at the box office or online.